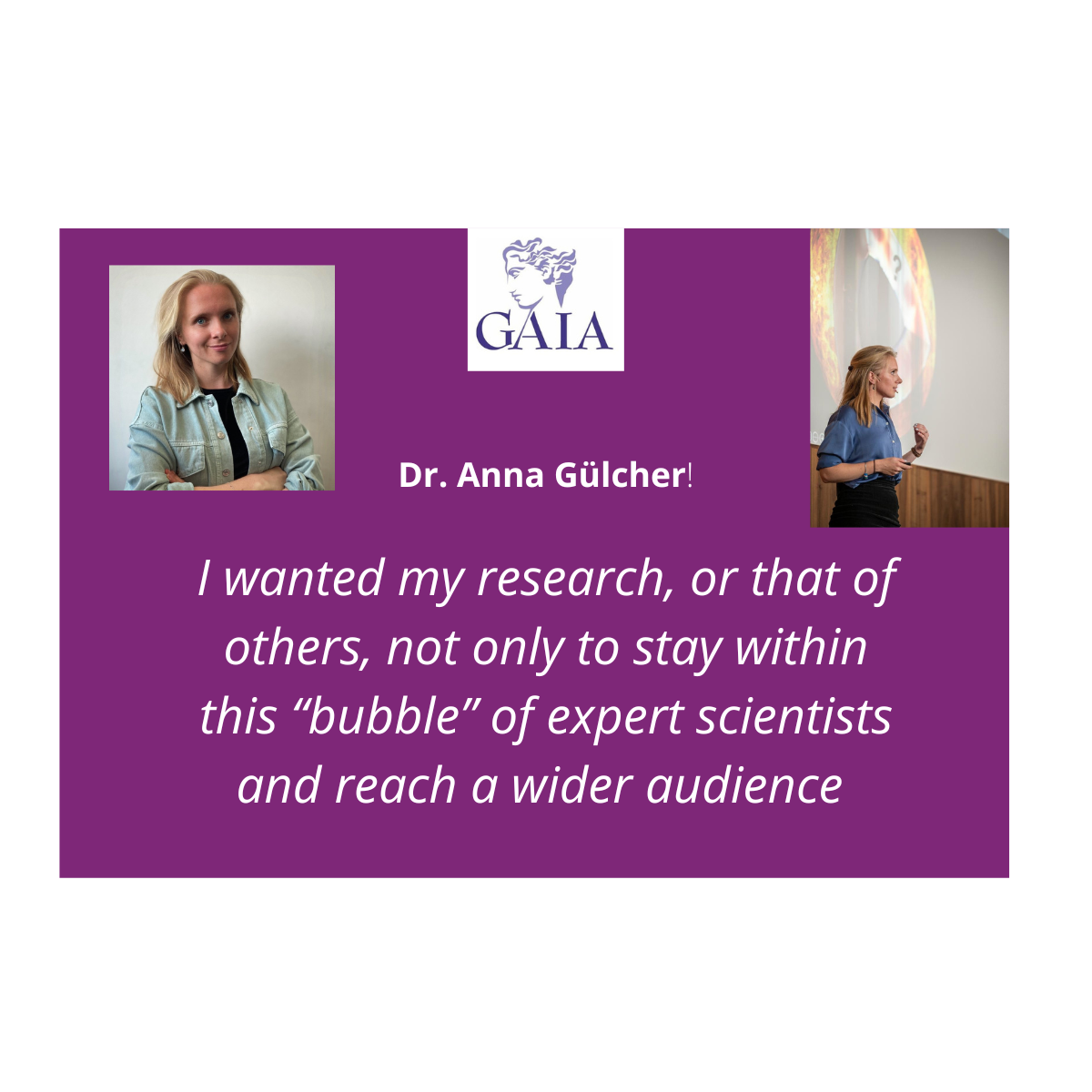 Anna Gülcher studied a BSc degree on Earth Sciences at Utrecht University (Netherlands). During this time, she was actively involved in the student association (U.A.V.) and the Geological Women’s Society Utrecht (U.G.D.D. Saxifraga). Later, she pursued a MSc in Geophysics at ETH Zürich and focused on geodynamic modelling of interior dynamics and surface tectonics of rocky planets (Venus). She stayed at ETH Zürich as a PhD candidate in the Geophysical Fluid Dynamics group, where she worked on modelling the long-term mantle convection of the Earth. In October 2022, she successfully finished her PhD and early 2023 she will start a research fellowship (postdoc) for a joint position at NASA JPL and Caltech (USA). In this research fellowship, Anna will further investigate Venus geodynamics and volcanism and collaborate with leading pioneers in the upcoming Venus science mission (NASA, ESA). She is currently a member of ESA’s EnVision Radio Science Experiment (RSE) science team. Ultimately, Anna is hoping to establish herself as an expert on Venus geodynamics and tectonics and become a role model for fellow (female) peers in science and STEM. (http://annagulcher.com )

1. Your expertise is Planetary Sciences (Geodynamics) and your work focuses on Venus. Could you share with us how did you end up researching on this topic and why you stayed on it?

Throughout my geoscience studies, I have always felt a keen interest in the long-term evolution of planets and the large-scale interior processes that control their surface conditions and environment. I was especially drawn to the Geodynamics field of geosciences since it integrates a wide range of disciplines (geology, computational sciences, chemistry, and physics), which meets my broad interests. Moreover, I really enjoy the coding and visualisation (creative) tasks required in Geodynamics. Initially, I always thought I wanted to focus on better understanding tectonic processes that shaped the Earth, since we simply have the best available data and observations of our own planet. Yet, as I was choosing the topic of my MSc thesis project, there was one project opportunity on geodynamics of our neighbouring planet Venus that would be in collaboration with an established scientist from the US. This collaborative prospect made me choose this project. Little did I know that just a couple of years later, studying Venus would be such a booming scientific field as NASA and ESA have selected a fleet of three scientific space missions to visit the planet in the near future! Obviously, this growing public interest in the field, the relevance due to the upcoming space missions, and, importantly, the pleasant and positive community of Venus researchers made me want to stay in this field.

2. During your academic career, have you ever had any role models to look up to? How has having role models affected your career?

I have very good relationship with my PhD supervisors and collaborators, who definitely serve as role models. They are extremely excited for and successful in science, have a friendly character, and acknowledge the importance of a healthy work-life balance. Yet, it was only during the second half of my PhD that I realised that I was severely lacking a female role model that I could better identify with. In fact, I only then realised that throughout my Geophysics master programme at ETH, I never received education from a female senior scientist! I was immediately drawn to the female pioneering researchers that I met at conferences and during meetings. With only a few short interactions, I had female role models (i.e., NASA’s VERTIAS space mission leader Sue Smrekar, and first-time female August Love Medal winner Anne Davaille) to look up to. This enabled me to better project myself forward in my career. My relationships with these role models are very rewarding: Anne Davaille served as an external examiner on my PhD defense, and Sue Smrekar will be my collaborator in my next position at Caltech and NASA JPL!

In fact, I only then realised that throughout my Geophysics master programme at ETH, I never received education from a female senior scientist!

3. The research community of Venus has a great number of female researchers and leaders. Therefore, there are more female role models than in other disciplines. What do you think is the reason for this?

I do not know whay, in this particular scientific field that emerged several decades ago, there are (or seem to be) relatively more female leaders. What I can say, however, is that having these female leaders really encourages younger female scientists to stay in the particular discipline. I notice that many fellow young Venus scientists are also female, and that the community is particularly friendly and encouraging towards one another.

I think one can be a role model in many ways, and I think it all has to do with setting the right example. On one hand, a role model is set by someone with a minority identity aspect (such as gender) achieving success and obtaining important (academic) positions. A better representation of women in such important positions gives others the sense of confidence that being a woman in academia (or elsewhere) is not a barrier to career progression. This is also the case for people with other minority identity aspects, such as race, religion, disability, or sexual orientation. On the other hand, one does not have to have an established career be a role model: giving a good example starts right away. By mentoring and teaching, by being involved in important discussions, and by helping others out in their career or individual progress. I am quite confident that an increased number of female role models would strongly encourage diversity of the next generation science/STEM. This is, in fact, highly beneficial for the community as a whole (see for example this study published in Nature Geosciences).

...one does not have to have an established career be a role model: giving a good example starts right away. By mentoring and teaching, by being involved in important discussions, and by helping others out in their career or individual progress.

5. You are very invested in outreach. You participate in podcast, write posts and articles for outreach websites and journals… I imagine that these activities take long time from your free or research time. Which are the benefits of these activities and why have you decided to do them?

It is also very clear that I want my research, or that of others, not to only stay within this “bubble” of expert scientists. I want to reach a wider audience: either scientists from different disciplines or the general public. I was straightforward with my wishes to participate in science communication with my supervisors at the start of my PhD. I consider all of these additional tasks as part of my work in science, and not as part of my free time! I work on these projects during my working time. I have found that for myself, I cannot focus eight hours a day, five days a week, on high-level research. I need to have a ‘break’ from the pure science sometimes to actually do better science! That is what these additional outreach tasks fall in, and in fact, they significantly advance my career: my research is more visible, my network is broader, my communication skills have improved, and I truly feel part of the scientific community. Of course, one should not say yes to too many extra projects, which I did learn the hard way…

6. Together with outreach you also perform other volunteering work in the scientific community. Why do you do it and which are the benefits of volunteering in scientific activities?

My answer to these questions may be partially hidden in my previous answer. But I will emphasize that I think the benefits of growing your scientific network and being visible are extremely high and are in fact extremely helpful in advancing your career and finding your next position. Also, it is good practice because, in fact, many activities in the scientific community are volunteer-based and as you grow more senior in your career, you are expected - or perhaps required - to participate in such roles.

want my research, or that of others, not to only stay within this “bubble” of expert scientists. I want to reach a wider audience.

7. Coming back to your career, what are your professional goals and how do you think you can combine them with outreach activities?

Dreaming big, I aim for my scientific work to be beneficial for the wider scientific and space community and that I will play an important role in the upcoming Venus missions from NASA/ESA. While achieving these goals, I hope to keep my enthusiasm for planetary sciences and excitement in my day-to-day work, as well as find a good balance between work and private life. These aspects ultimately are drivers for success. To reach a wider audience, I will continue communicating my work, or that of my colleagues, in different formats and settings. On another note, I hope to help train and mentor young scientists and establish a successful and diverse research group.

8. To finish the interview, we need to talk about a hot topic on Geosciences: lack of diversity in the sector, not only gender-related diversity. Why do you think this happens and what should change in order to make the sector more diverse?

I think that the lack of diversity in (Geo)sciences is rooted deep in various ways. This is not just in academia, but also in society as a whole. Diversity issues already arise early on through education, in the day-to-day media, and politics, and they develop further in universities and science/STEM. I do not see a quick fix, but I think it is extremely important that diversity discussions are held (in a constructive way!) and good examples are set. Role models play an important part and a diverse pool of senior scientists will significantly advance diversity in the next (career) generations. We need to think about our (implicit) biases and how to make review/hiring processes more transparent and fairer. Moreover, having a family should no be a barrier to career progress. What I identify as another key challenge is to involve the whole (Geosciences) community in these discussions and tasks, not just the people who are most affected by the lack of diversity. I hope that in the future, I can play a part – even if minor - in these goals.

GAIA works together with